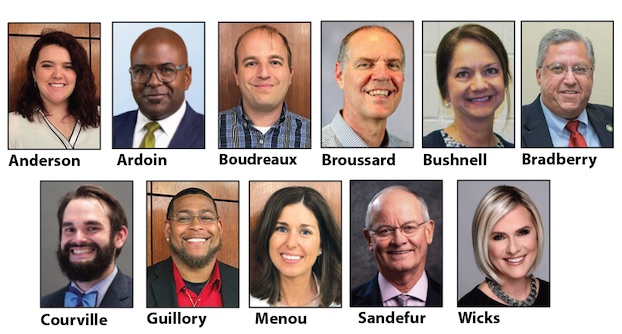 The Louisiana State Arts Council receives applications for matching federal funds available from the National Endowment for the Arts and such other funds made available to the council and make recommendations thereon. The boar reviews and approves or rejects said grant applications from other governmental units, community arts councils, and other private, nonprofit, and tax-exempt groups.

Additionally, the council advises departmental officers on the design and execution of an annual state plan consistent with the goals and policies of the department as provided by federal and state law, rules, and regulations, and submits the plan to the National Endowment for the Arts.

Ardoin is a three-time Grammy nominated Kreole Rock and Soul musician. He was nominated by the Arts and Humanities Council of Southwest Louisiana and will represent the 3rd Congressional District and the 5th Planning District.

“The new location gives us expanded space for our team and equipment, so we can better serve our clients,” explains Luke Saucier, owner.

Founded in 2000 by Saucier, the company has steadily grown. Today, they have about 40 employees and service clients throughout Southwest Louisiana.

McShan named to state board

The primary function of the council is to review and adopt the state uniform construction code, provide training and education of code officials, and accept all requests for amendments of the code, except the Louisiana State Plumbing Code.

Specifically, the council establishes the requirements and process for the certification and continuing education of code enforcement officers, code enforcement inspectors, third party providers and building officials and determines whether amendments to the state uniform construction code are justified.

McShan is a certified building official for Building Inspection Group. He will serve at-large.

The college recognized Sandefur for his significant contributions to the field of optometry in his home state and beyond. He operated a private practice for more than 30 years and was among the first optometrists in Louisiana to serve on a hospital staff.

Sandefur earned his Doctor of Optometry degree from SCO in 1965. Following his graduation, he founded The Vision Clinic in Oakdale, where he provided care for more than 30 years before selling the practice. A proud alumnus of SCO, he joined the college’s Board of Trustees. While on the board, he co-chaired the college’s “Envision Our Progress” fundraising campaign, which led to the 2013 construction of a new academic complex. He also served as the board chair in 2019.

Sandefur recently retired as executive director of the Optometry Association of Louisiana. Under his 25 years of leadership, membership in the state’s association doubled. His leadership helped secure passage of numerous bills that help optometrists better serve their patients today.

Sandefur was repeatedly recognized with industry awards for his dedication to his profession. The American Optometric Association honored him with the Distinguished Service Award in 2010 and inducted him into its National Optometry Hall of Fame in 2017. Additionally, SCO presented him with a Lifetime Achievement Award in 2001 in recognition of his longtime service to the profession of optometry.

Dr. Alex Courville of the Allen Parish Community Health-care Clinic has been named the 2022 Population Health Pioneer Award winner for Physician Leader of the Year.

The Population Health Pioneer Awards are presented each year to honor those who have best served their patients, their community, and the health care industry through their leadership, dedication, and innovation over the past year.

The SEED Center recently hosted the 10th Annual Business Pitch competition. Winners in each division were awarded $5,000 and in-kind counseling in accounting and marketing.

“The diversity of ideas on display clearly demonstrates that the entrepreneurial spirit is alive and flourishing in Southwest Louisiana.  This year’s competition is confirmation of that fact. The winners and finalists will now move forward to take advantage of the resources available to them in the Incubator on SWLA Alliance for Economic Development” said Adrian Wallace, executive director, The SEED Center Business Incubator.

Technology: Snag A Tech (Scott Boudreaux).  “A field service IT app designed for customers to located technical support in rural and hard to cover areas as well as Metro areas using an app based escrow.”

1st Place: Legacy Made, LLC (Kelly Menou). “Legacy Market is a revolving restaurant of vendors that are combined to complement each other, benefiting local business & the community of DeQuincy.”

Clint Broussard has been named director of marketing and business development for ClearSky Rehabilitation Hospital of Rosepine.

In his new role, Broussard will be responsible for the hospital’s admissions department and will coordinate activities to educate patients, families, community, and referral sources about hospital services.

A registered nurse, Broussard previously was a referral development coordinator at an inpatient rehabilitation unit in Lake Charles. He possesses nearly 30 years of clinical and marketing development experience in various settings, including rehabilitation, home health, emergency care, and critical care.

Broussard is committed to personalized patient care, and says he enjoys coordinating with the hospital team, referral sources, and the community to ensure the rehabilitation process is delivered with the highest level of care and compassion.

Broussard graduated from Louisiana State University – Eunice with an associate’s degree in nursing.

NEW ORLEANS — The 2022 Louisiana Bar Foundation Horn Blower Award was given to Judge Guy Bradberry in recognition of his outstanding support and leadership in assisting the LBF in advancing an initiative, project from 2021-22 LBF President Christopher K. Ralston.

Bradberry is with the 14th Judicial District Court, Division C, in Lake Charles. He has been a LBF Fellow since 2002 and began serving as a board member in 2014.

The LSCLS is the state chapter of the American Society for Clinical Laboratory Science and furthers the national organization’s mission to make a positive impact in health care through leadership and excellence in the practice of laboratory medicine.

The presentation included awards from 2020 and 2021, as the LSCLS conferences were not held due to COVID 19-related restrictions. For her service in 2020, Bushnell received the Omicron Sigma Award in recognition of her outstanding service to the organization and the Educator of the Year award for her exceptional professional achievement and high professional ideals.

For 2022, Bushnell was again awarded the Omicron Sigma Award as well as the LSCLS Presidential Service Award, signifying recognition of her “above and beyond” service to the professional organization.

Bushnell is a first-generation 1989 McNeese graduate with more than 30 years of experience in the field of medical laboratory science. Before coming to McNeese, Bushnell spent 14 years working in all areas of the medical laboratory at Lake Charles Memorial Hospital where she served as hematology supervisor. She received her Master of Education degree from McNeese in 2002.

Healthy Image is owned by Kristy Como Armand, Christine Fisher, Barbara VanGossen and Shonda Manuel. Healthy Image opened in 2002 and has grown steadily over the years. The agency moved into their current location at 4845 Ihles Road in Lake Charles in 2017.

Healthy Image offers comprehensive marketing, advertising and public relations services to over 100 clients in a wide range of business sectors. The company has received recognition for business performance on the local, regional and national level.

Local EXIT Realty affiliated offices are pleased to announce the addition of the following individuals to their teams of dedicated real estate professionals.

These EXIT Realty offices are members of EXIT Realty of Louisiana’s rapidly expanding network of independently owned and operated brokerages across the region.

Edward Jones Financial Advisor Vickie Wicks of Lake Charles ranked No. 1 among Top Women Wealth Advisors Best-in-State in Louisiana. She has served area investors for the past 31 years. To compile the 2022 list of 1,377 women, SHOOK Research analysts conducted more than 16,000 interviews with nominees. Criteria included client service, compliance records, community involvement, the investment process, assets under care and tenure in the industry.

Wicks’ office is located at 4315 Lake St., Suite 1 in Lake Charles. She and her branch team, Alicia Thibodeaux, Theresa Schmidt, Whitney Manns and Mark Fuselier, can be reached at 337-477-2356.