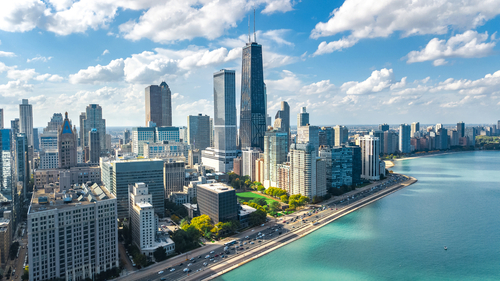 The City of Chicago struck a deal with Constellation Energy, in collaboration with Swift Current Energy, to purchase renewable energy for all city facilities and operations by 2025.

“I am incredibly proud to advance this commitment to transitioning all city operations to 100 percent renewable energy by 2025,” Chicago Mayor Lori Lightfoot said in announcing the agreement. “The signing of this agreement demonstrates that the City of Chicago is leading by example and driving high-impact climate action, building the clean energy workforce of the future, and equitably distributing meaningful benefits to foster the local clean energy economy for all.”

The initial five-year energy agreement with Constellation begins in January 2023. By 2025, Chicago will partially source its large energy uses such as the airports, Harold Washington Library Center and Jardine Water Purification Plant with energy from a new solar generation installation currently being developed by Swift Current Energy in Sangamon and Morgan counties. Swift Current Energy will own and operate the facility, called Double Black Diamond Solar. At 593 megawatts, it is expected to be one of the largest solar projects in Illinois to date. Further, the city will procure Renewable Energy Credits from other sources for its remaining power uses, such as small and medium-sized buildings and streetlights.

“We are providing a clean energy solution that will help the City of Chicago significantly reduce its carbon footprint and make a tangible, positive impact in the fight against climate change,” Jim McHugh, chief commercial officer at Constellation, said. “As we work with our customers to implement sustainability initiatives, it is especially important that we help underserved and under-resourced communities participate in the transition to a carbon-free future. We look forward to collaborating with Swift Current Energy to bring this project to life for the City of Chicago.”

This agreement is the culmination of a competitive procurement process conducted by the Department of Assets, Information and Services in an effort to accelerate the transition to renewable energy outlined in the 2022 Chicago Climate Action Plan.

“We are thrilled to have the City of Chicago as a key customer for the Double Black Diamond Solar project. At 593 megawatts, Double Black Diamond Solar has the capacity to create significant benefits for the State of Illinois. We commend the City of Chicago for their leadership in securing 100 percent clean, renewable energy for all City buildings and operations and Sangamon and Morgan Counties for hosting this project,” Matt Birchby, co-founder and president, Swift Current Energy, said.

By procuring solar energy for city operations, Chicago is expected to reduce its carbon footprint by more than 290,000 metric tons each year.

Also, Constellation and Swift Current Energy have made financial commitments under the agreement to help fund job training, apprenticeships, and educational and other programs in Chicago that focus on the development of a diverse, clean energy workforce.

S&P 500: What Happens In August? These 7 Stocks Are The Best