Not long after, an email sent by David Victor, a past president of the pro-Israel AIPAC lobby group who lives in the Detroit area, was leaked to a progressive group and posted on social media. Victor had backed Levin, son of longtime former congressman Sandy Levin (who was brother to the late US senator Carl Levin), in 2018. But in the message, sent to pro-Israel donors in the Detroit area, Victor called Levin “arguably the most corrosive member of Congress to the US-Israel relationship,” and urged the donors to back Stevens in the race.

“Andy frequently and one-sidedly criticizes Israel, defends and even fundraises for its worst detractors… and from his seat on the House Foreign Affairs Committee authors and supports highly problematic legislation,” Victor wrote in an appeal for a fundraiser that would eventually net close to $400,000. “And he does so as a Levin, a name which due to his uncle and father commands respect and admiration on Capitol Hill. To make matters worse, Andy sincerely claims to be a lifelong Zionist, proud Jew and defender of Israel. So when Andy Levin insists he’s pro-Israel, less engaged Democratic colleagues may take him at his word.”

The email drew instant furor, including from the prominent Reps. Jerrold Nadler and Jamie Raskin, who signed a letter with nine other current and former Jewish Democrats in defense of Levin.

“It is out of bounds to malign the only Jewish candidate in this race by impugning Andy’s love for the State of Israel or his community bona fides, which run strong and run deep,” the signatories wrote.

The email and its fallout underscores how the deadlocked Levin-Stevens August primary — early polls showed an exact tie, with 18% undecided — is encapsulating the main Jewish issues germane to voters heading into this year’s midterm elections: Israel policy and the root causes of antisemitism.

Levin, 61, a former longtime union leader, both wears his Jewish involvement and liberal Zionism on his sleeve and is friends with Rashida Tlaib, the Detroit congresswoman who does not agree with Israel’s right to exist as a Jewish state. He says his Jewish identity informs a broad array of passions, from his synagogue membership and his warnings about autocracy in America and abroad, to his advocacy on combating climate change and his willingness to criticize Israel in its treatment of the Palestinians.

Stevens, 38, worked on Democratic presidential campaigns and is a veteran of the Obama administration’s efforts to revive the auto industry after the 2008 recession. She is not Jewish, and is a moderate; when it comes to Jewish issues, she is laser-focused on staunch defense of Israel against its enemies and is skeptical of a US reentry into the Iran nuclear deal.

The divides between them on issues of Israel and antisemitism are stark: Levin has led a legislative effort to raise the US profile in Israel-Palestinian peace talks, while Stevens believes intensive US involvement is inappropriate. Stevens is backed by AIPAC, the powerhouse pro-Israel lobby, while Levin is backed by J Street, AIPAC’s more liberal foil. Levin says the most serious threat to Jews emerges from the right wing; Stevens says it must be confronted on both the right and the left. 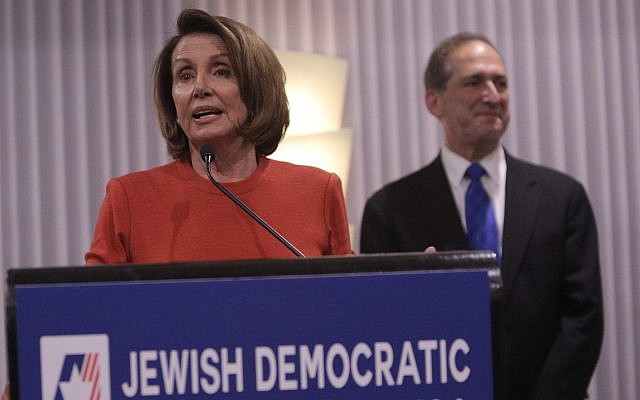 In March, both participated in a candidate forum run by the Jewish Democratic Council of America, a group that campaigns for Democrats among Jewish voters. Levin referred to his past presidency of T’chiya, a Reconstructionist congregation in Detroit, as well as to his role in founding Detroit Jews for Justice, a progressive activist group.

“The movement is still going strong today, as witnessed by last week’s raucous Purim shpiel!” he said, referring to a Detroit Jews for Justice event that included crafts, homemade hamentashen and “a Reproductive Rights themed spiel.”

Stevens, meanwhile, leaned into her pro-Israel advocacy, describing her trip to Israel in 2019 as a freshman in Congress with the American Israel Educational Foundation, an AIPAC affiliate.

“I traveled to Israel in 2019 with dozens of members of the freshmen class of 2018 and stood in front of the Iron Dome in a bipartisan way, recognizing and seeing what our investment goes toward,” she said, referring to the anti-missile system. 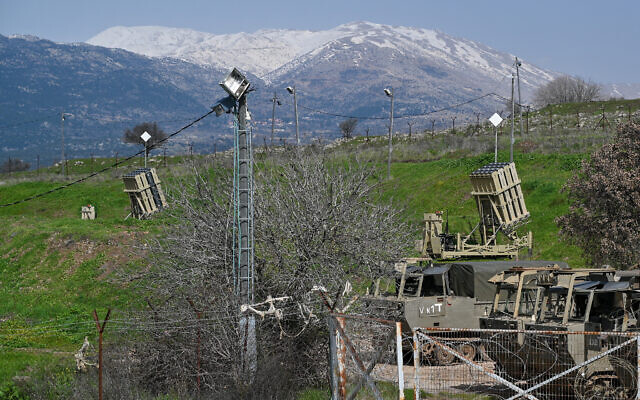 Illustrative: An Iron Dome air defense system is seen near the Israeli border with Lebanon, on February 18, 2022. (Michael Giladi/Flash90)

Both candidates have long lists of Jewish backers, including members of Congress — despite the fact that Levin’s decision to run against a Democratic colleague in the 11th, instead of taking on a Republican in the 10th, has infuriated many Democrats. (An insider with the centrist pro-Israel community who asked for anonymity to speak freely said Levin would have drawn AIPAC-aligned opposition even if he ran in a separate district.)

But everyone interviewed for this story, whomever they backed, referred to both candidates by their first names and insisted that they respected and liked both of them.

Brian Hermelin, whose late father, as ambassador to Oslo in the 1990s, was involved in advancing the Israeli-Palestinian peace process, and who is backing Stevens, said the breach with the Levins has been painful.

“I think this is all hard, right?” he said in an interview. “We’ve been so proud of our longtime support of the Levins and in both the Senate and in the House, and so this has not been without a lot of consideration. To support Haley in a race head-to-head against Andy is something that’s been quite difficult. It’s unfortunate, but it’s necessary given Andy’s public posture regarding Israel.”

The new 11th District is believed to include about 40,000 of the 70,000 Jews living in the Detroit area. The population of congressional districts nationwide generally runs to 800,000, which means that 5% of the district’s voters are Jewish.

Israel scores low as an issue among Jewish voters, but it plays well among a set of donors, and last month Stevens made close to $400,000 at a single pro-Israel fundraising event (a stunning portion of the more than $1 million she raised in the last quarter). A flier for the event listed a who’s-who of prominent Michigan Jews, and dubbed the gathering “the largest individual event for a candidate in Michigan’s history!”

Levin’s appeal to Jewish voters is being one of them. In the JDCA forum, he namechecked where he grew up: near the church of the notoriously antisemitic Depression-era radio broadcaster, Father Charles Coughlin.

“I grew up down Woodward [Avenue] in Berkley, in the shadow of Shrine of the Little Flower, Father Coughlin’s church, where I experienced intense and open antisemitism,” he said. “However, I also discovered the strength I could draw from a vibrant and resilient Jewish community and how to build movements to unite diverse people across all forms of hatred.” 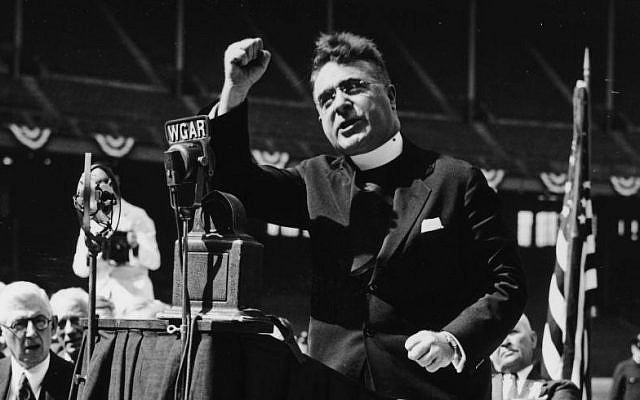 Father Charles Coughlin, known as ‘the founder of hate radio,’ a leading proponent of American anti-Semitism during the 1930s (Public domain)

It’s an approach that resonates with the district’s Jews, said Roslyn Schindler, a retired professor of Holocaust studies at Wayne State University who is backing Levin.

“Andy Levin lives his Jewish values every day of his life,” she said in an interview. Jewish voters “are not just focused on a couple of issues on Israel-Palestine. The Jewish community is concerned about a number of issues — social, racial and economic justice, reproductive justice and reproductive rights, support for workers and unions, sensible gun control, appropriate health care, voting rights.”

Levin also casts antisemitism and its emergence among the far right as a key threat.

“The data are really clear and really overwhelming,” he said in the forum. “The main source of antisemitism in this country is white supremacist, and the vast majority of antisemitic acts of violence in the US come from that source.”

The appeal of Stevens, said Hannan Lis, one of her backers, is that she is ready to combat antisemitism on the left as well.

“When he [Levin] talks about antisemitism, you know, he only talks about one part of it,” Lis, who backed Levin in 2018, said in an interview. “There is some antisemitism in the left, you know — which denies Jews the right to self-determination, who call for a one-state solution, even the destruction of Israel.”

Stevens appears to be aware of limiting her pitch to Jewish voters to the Israeli-Palestinian issue.

“This new district of mine has easily about 40,000 Jewish constituents,” she said Thursday during an online AIPAC event. “And, you know, not everyone who’s Jewish is going to be as fired up as I am about the US-Israel relationship, because we maybe don’t want to run for Congress, but a lot are impacted.”

Stevens’s campaign has a dedicated and lengthy Israel page on its website; Levin gives it one paragraph in a section called “Peace and Human Rights.”

Stevens told the AIPAC audience that she did find one voter with whom Israel resonated.

Alicia Chandler, who has long been involved in the local Jewish community in lay and professional capacities, said the community would work through the tensions.

“There’s very much been a concern that this race would be divisive within the Jewish community,” Chandler, who backs Levin, said in an interview. “I think there’s a lot of people within the leadership of the Detroit Jewish community that are trying hard that that doesn’t happen.”

Board of IIFL Finance approves JV with Open Financial Technologies 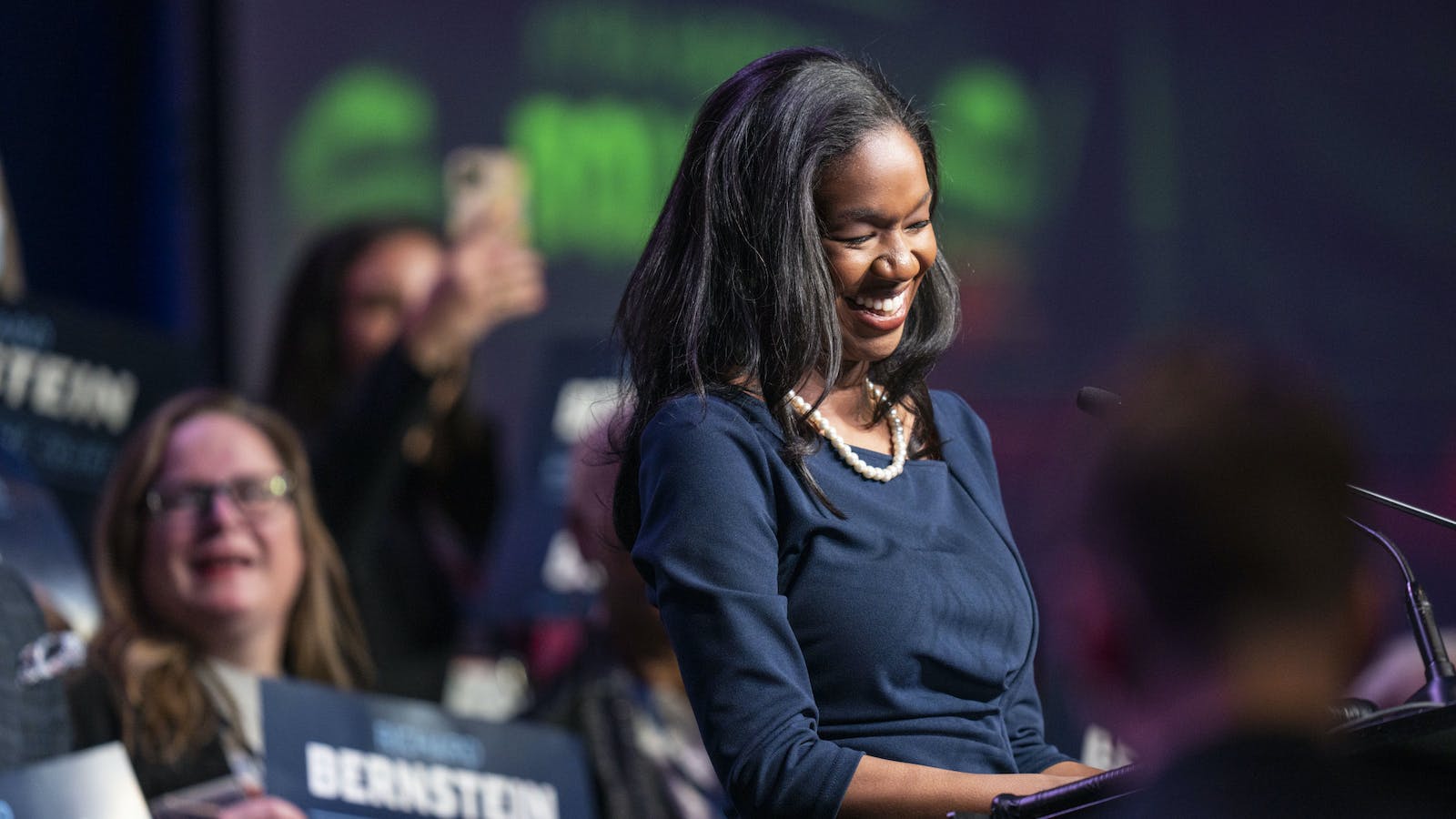