Shares of shoemaker Skechers (SKX -0.13%) have been on a wild ride. The company enjoyed rapid growth in the first half of the 2010s, but over the last five-year stretch, the stock has turned volatile and is up only 38% as of this writing. That compares to an 81% total return (including dividends) for the S&P 500.

Since the company released its second-quarter 2022 earnings report, I’ve put Skechers on a short leash, and might sell the whole position later this year. Here’s why, and what I’ll be looking to replace it with instead.

1. Growth is cooling off

Skechers notched a big rebound in 2021 as effects from the pandemic eased. In fact, the company reported record sales of $6.29 billion, a 37% increase from the depressed results of 2020. The company’s direct-to-consumer segment (sales from its website and retail stores) grew 38%.

But as its recovery from the pandemic wanes, growth is becoming far more pedestrian. Q2 2022 sales were up only 12% year-over-year, and the direct-to-consumer business increased just 4.3%. On this latter front, Skechers said the number of shoes it sold directly to customers was flat compared to a year ago, with the small gain in direct-to-consumer revenue driven by price increases. It appears to be losing momentum.

Skechers is a growth company, especially internationally where it is trying to expand its footprint in emerging markets. As a result, earnings can be unpredictable as the company spends to support its expansion.

However, it appears inflation is hurting the bottom line this year. The company has put some price increases in place, but gross margin on products sold fell to 46.7% in the first half of 2022 (compared to 49.7% last year). Earnings per share are down nearly 11%. And over the last five-year stretch, free cash flow is actually down overall for Skechers. I’d like to see that metric rise over time, not decline. 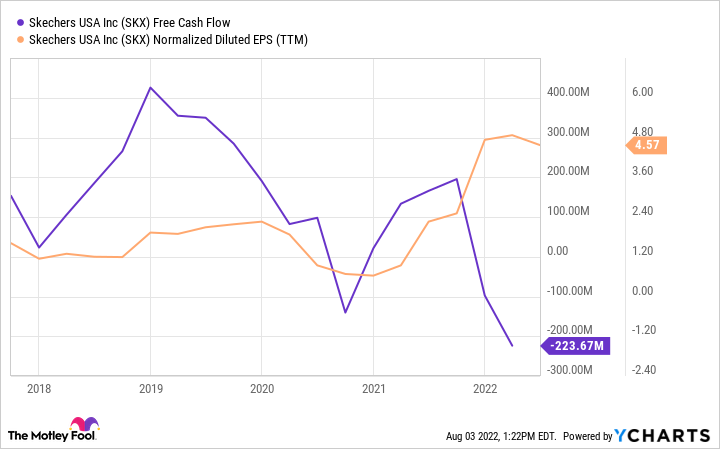 The shoe industry always has been and always will be incredibly competitive. Consumer tastes and fashion trends change, creating new opportunities for new brands to gain ground on the old incumbents. In recent years, that’s what has happened.

In the running shoe department alone (a top end market for Skechers), new brands like On Holding (ONON 0.93%) have gained traction with consumers. Established athletic companies like Nike (NKE -0.53%) have also held on to their market share, and are forging relationships with customers online (more on that in a moment). With Skechers showing signs it’s slowing down in this race, I think some other shoe brands might be better buys for the next few years.

Speaking of competition, the three replacements I have my eye on are Crocs (CROX 6.56%), Lululemon Athletica (LULU 0.44%), and Nike.

Consumer trends continue to be influenced by the last couple of years of dealing with COVID-19. Exercise-inspired apparel is still all the rage, but everyday comfort and casual attire has taken the stage too. That’s where Crocs’ goofy (at least according to some opinions) foam clogs come in. Crocs sales soared the last couple of years, and the company is holding on to all of those gains.

Its recent acquisition of hot casual shoe company Hey Dude will take some time to pay off (the company took on debt to acquire it), but I think it was a good, long-term move. Crocs sales were up 14% year-over-year in Q2 2022, and Hey Dude sales nearly doubled. Adjusted earnings are also on the rise. I already own some Crocs stock, and I’ll keep adding to it.

After years of sitting on the sidelines, I recently bought my first batch of Lululemon stock. It’s another one I’d add to right now. Its high-end athletic wear and everyday clothing is winning with younger generations, and it has a best-in-class online and retail store business that makes up nearly half of all sales.

Annual average revenue has been growing north of 20% for years, and the company’s operating margins over 20% are fantastic for a clothing and retail operation.

Lululemon is also just rolling out its lineup of shoes, starting with running shoes for women. If Lululemon shoes take off like its other apparel categories, this will be another win for shareholders.

And then there’s Nike, one of the most powerful and recognizable brands in the world. In spite of its age and a myriad of other companies nipping at its heels, Nike remains as powerful as ever.

Though impacted by inflation and foreign currency exchange rate issues, revenue grew 5% in the recently completed 2022 fiscal year. Its direct-to-consumer business also continues to gain traction and is expanding at a double-digit percentage pace.

After the bear market of 2022, the stock is as cheap as it’s been in years, currently trading for 24 times one-year forward earnings. It’s a premium price tag, but for good reason.

To be fair, I am giving Skechers some slack. I’ll see how things go in the next few months, and how the company navigates some of the issues with supply chains and basic material inflation. But as the current bear market gives way to the next bull market, I’m thinking that Crocs, Lululemon, and Nike might be better buys.