I don’t usually talk about which stocks to sell. I’m a big believer in buying stocks with strong fundamentals and holding for the long term, which means I don’t advocate a lot of selling in the interim.

However, sometimes there are reasons to sell a stock. The fact that you need the money is the most obvious one. You may also have made money on our investment and now see better opportunities. A collection of about 25 stocks in diversified industries typically makes up a great portfolio, and sometimes it makes sense to switch things around to keep balance and take advantage of new opportunities.

The one thing you want to most avoid is panic selling. In a volatile market with prices plummeting, investors need to stay calm and wait it out. That’s what’s happening right now, and you don’t want to sell at a loss. But if you already saw your investment increase, you may want to reconsider growth stocks whose prices outpaced their fundamentals and are now falling flat. 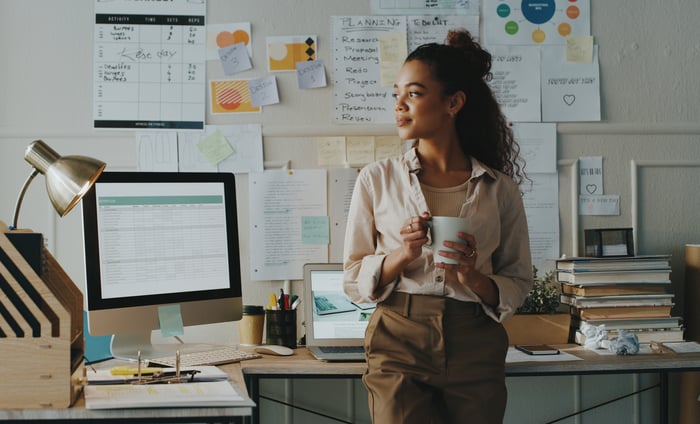 1. Robinhood: Growth is slowing down

Robinhood, the “free trading” app, drew a lot of interest as the market soared along with individual investors taking control of their trading. These trends were accelerated by the meme stock movement, where retail investors joined together through social media to move the markets. Customers swarmed the app, and it looked like the right time for it to go public.

But the company has gone through many challenges since then, not the least is its inability to attract more customers as market conditions shift, or increase revenue as investors pull back. It has also not been able to post a profit, and although its net loss narrowed in the first quarter versus the year before, it’s still large.

In 2022’s first quarter, revenue decreased 43% from the same period a year ago, while the net loss was $392 million versus $1.4 billion last year. Adjusted earnings before interest, taxes, depreciation, and amortization (EBITDA) was a $143 million loss, versus $115 million in earnings last year. Monthly active users fell 10% to 15.9 million, and average revenue per user decreased 62%.

Chief Executive Officer Vlad Tenev spoke a lot about “discipline” in the first-quarter conference call, and the company is making many operational changes to increase revenue and become profitable. Long-term investors might look at this a blip on the road to future success, but there are challenges across many areas, making this look less like a surefire business waiting to happen.

Robinhood stock was priced at $38 per share at its initial public offering just last July and reached a high of $85 before plummeting. It’s now trading at less than $11, and investors may want to reevaluate their positions.

2. WeWork: Can the company make it work?

WeWork went public in a special purpose acquisition company (SPAC) deal last October, and its stock has since dropped 43%. That transaction came after a difficult period, when offices closed during lockdowns, and after the company’s founder’s fall from grace and scrapped initial public offering two years earlier.

New management and seed money have breathed some life into the company, which appears to be climbing back. In this year’s first quarter, revenue beat expectations, increasing 28% year over year to $765 million. Occupancy rose 4% over the previous quarter to 67%, and All Access members increased 22% year over year to 55,000.

Net loss narrowed from more than $2 billion last year to $504 million this year, but it still seems light-years away from becoming profitable. Adjusted EBITDA was a $212 million loss in the first quarter, its best performance ever, and management is expecting 2022 adjusted EBITDA to be in the range of a $400 million to $475 million loss.

The company raised more cash and ended the quarter with $1.6 billion in cash and commitments, and its business doesn’t look endangered. However, there’s a lot of work to be done to keep growing and become profitable.

3. Stitch Fix: Not yet fixed

Stitch Fix has fallen so far that it’s now trading at about $8 per share. That’s about 90% off of its high of $97 in January of last year.

Investors and customers alike were initially excited about the company’s novel approach to shopping, which comprises personal shoppers choosing and shipping a monthly “fix” of clothing to a shopper’s door. The company’s reliance on machine learning means that it gets continually better at choosing the right clothing, which should result in higher sales and fewer returns. The model underwent several revisions over the past few years to allow for various intervals between fixes and direct purchases outside of a fix.

Things were looking up under lockdown, since the company is all digital. However, it hasn’t been able to sustain high growth, and the chief executive officer-founder left the company last year. Since then, it hasn’t quite found its footing.

In the 2022 fiscal second quarter (ended Jan. 29), revenue creeped up 3% year over year to $517 million. That doesn’t sound like a growth stock. Net loss increased from $21 billion to $31 billion this year. Even worse, management is expecting sales to decline year over year in the third quarter.

There were some positive signs, such as in increase in revenue per active client to $549. So active customers are engaged. But according to new CEO Elizabeth Spaulding, there are “challenges with onboarding and conversion of clients.”

Can the company stage a comeback? Yes. But the model just might not live up to its original premise, and it’s looking riskier as it bleeds cash and looks for direction.

If you’ve already made money on your investment, it may be time to reconsider whether your funds might work better for you elsewhere. Even if you would lose some of it, you can begin to make that up by finding more viable companies that have better long-term chances. Especially in this market, you can find amazing values as prices drop. And if you have focused on growth companies until now, you might want to check out some value stocks that can offer your portfolio more protection when conditions aren’t so suitable to growth stocks. Therefore, the recommendation to “reconsider” is not necessarily a recommendation to sell.

Editorial: Keep partisan politics out of Longview City Council and its elections | Editorials