Warren Buffett’s Berkshire Hathaway has made a big bet on Citigroup, as the legendary investor funnels some of the conglomerate’s mammoth cash hoard into stocks during this year’s market decline.

Berkshire bought $3bn worth of shares in the Wall Street bank in the first quarter, giving the group a stake of about 2.8 per cent, according to filings with regulators. The investment came as Berkshire sold the remainder of its position in Wells Fargo, a rival bank that was a staple in Buffett’s portfolio for more than three decades.

Buffett, Berkshire’s chief executive, watched from the sidelines as markets plunged and then rallied at the height of the pandemic. But at the start of this year, he ploughed $51.1bn into the market as global stocks sagged in the face of a hawkish pivot from the Federal Reserve, supply chain disruptions, strong inflation and the war in Ukraine.

Markets have continued to decline, knocking the valuations of large technology companies, banks and consumer-facing businesses.

Berkshire ended 2021 sitting on a near-record $146.7bn cash pile — ammunition to make purchases even as other portfolio managers disclosed sales to keep up with outflows from their investors.

Citigroup has slid more than 21 per cent this year, underperforming the average financial sector stock in the S&P 500 index, which is down 16 per cent for the year.

The lender has lagged behind its Wall Street rivals in critical profitability metrics for more than a decade and is the only big US bank that trades below book value at 52 cents a dollar, according to FactSet. Citi also warned of losses of up to $3bn tied to Russia when it announced financial results in April, contributing to a near halving of its profits for the quarter.

Jane Fraser, chief executive, has promised to boost returns by exiting less-efficient businesses such as international retail banking and focusing on more profitable divisions such as wealth management and transaction services. 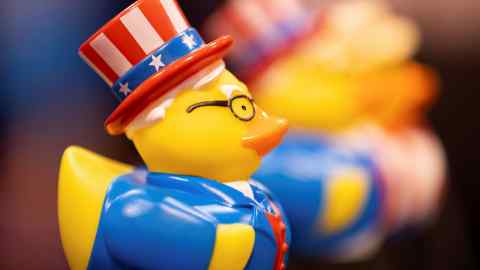 Beaten-down stocks were not the only ones to attract Berkshire.

The conglomerate bought $7.7bn worth of shares in oil and gas company Occidental Petroleum and boosted its stake in the oil major Chevron. Occidental’s shares are up almost 120 per cent this year while Chevron has climbed 45 per cent, as energy prices have rallied because of strong demand and the prospect of curtailed supplies from Russia.

Buffett’s company also invested $2.6bn in Paramount Global, the US media group formerly known as ViacomCBS, and bought $400mn worth of shares in lender Ally Financial. Paramount has lost 7 per cent this year, while Ally is down almost a fifth.